END_OF_DOCUMENT_TOKEN_TO_BE_REPLACED

Several recent studies from the world of geology have relevance in this damp corner of the country.  They point to the possibility that “the big one” might be bigger than we thought.

Lesson from Indonesia. They’ve had 5 major earthquakes in the past 5 years, including the famous tsunami of 2004.  A more recent quake and tsunami off the coast of Sumatra was eerily like the one that’s predicted to hit the coast of Washington and Oregon some day.  Major lessons?  As I reported for KPLU, it showed that these deep quakes could be more powerful than previously thought.   There was no tsunami this time, but the public knew enough to head for high ground anyway, just in case.

Slow quakes and Mega-quakes. You may have heard of “slow earthquakes” (also known as “deep tremors”). They happen pretty regularly in the land of Cascadia, as the power of a big earthquake is released slowly over a period of weeks.  We don’t feel anything, because the energy is spread out over time.  The leading theory is these release energy in one area as two plates on Earth’s crust slide past each other–but add to the pent-up energy at a deeper spot.  Now, scientists (led by Ken Creager at the U. of Washington) find a second type of unfelt tremor may be adding even more tension to the fault zone that runs beneath the Interstate-5 zone.  If so, that means “the big one,” whenever it happens, could be bigger than previously thought.  Geologists and engineers have to go back and re-do some calculations to see if we need to change our building codes.

Could this seismograph fit in your basement?

Volunteer to be a basement seismologist. The U.S. Geological Survey and U.W. are looking for modest size homes throughout the Seattle area, to create a network of sensors.  A similar project is underway in the San Francisco area.  They’ll get data on how different soils and different types of structures respond to shaking.  They need a spot on a concrete floor about 2 ft. x 2 ft. with electrical power and potential internet connection.  To sign up, check out the NetQuakes program.

I wrote about “deep tremors” (also nicknamed “slow earthquakes”) last January, both in this blog and for KPLU.  You didn’t feel it, no matter where you live, but the quake happened under western Washington during April and May.  That was a couple months earlier than scientists expected.  So, they didn’t get their instruments in the ground in time to record it.  No matter — the deep tremors come back approximately every 15 months.

There’s a nice write-up by Sandy Doughton in The Seattle Times today.  She went on the scene, in Sequim, as the researchers lay down their seismometers in the Olympic forest (great photos, too), and she gives a lengthier explanation of the science behind (or beneath) these episodic tremors.

It was a bit late (or the scientists were premature) but the Redoubt Volcano has finally begun erupting.  (See my previous post for context.) You’ve probably heard the top news on this by now.  Here are tidbits that might have been lost in the headlines. 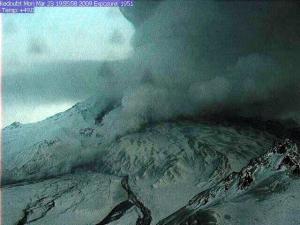 We think of Mt. St. Helens as America’s star volcano.  But, outside the continental U.S. there’s a lot of action.  Not only Hawaii’s dramatic Mauna Loa and Kilauea, but along Alaska’s Cook Inlet there are several “restless” volcanos.

Lately, it’s Redoubt Volcano, about 100 miles from Anchorage. It’s a striking peak, at 10,197 feet (just a little shorter than Mt. Baker in the Washington Cascades).  The U.S. Geological Survey says it expects “an eruption to begin within the next few days or weeks.”  Well, they started saying that more than a week ago.  So, hold onto your hats.

Last time, in 1989 and 1990, it erupted more than 20 times over a period of several months.  It shot a huge ash plume into the air that almost caused a commercial jetliner to crash.  And melting glaciers turned a nearby river into roaring torrent — which nearly wiped out an oil terminal.  No oil leaked, but buried pipelines were scoured to the surface and thousands of gallons of crude were hastily transferred away.

What will happen this time?  The USGS says the most likely scenario is something similar to 1990.  But, volcano prediction is not the most precise of sciences.  (And for those wondering if there’s any seismic connection between Redoubt and Mt. St. Helens, the answer is no.)

I slept through it.  Did you feel it?  At 5:25 am today (Friday) there was a moderate earthquake in the Puget Sound area, centered near Poulsbo, WA on the Kitsap peninsula.  The USGS says it was a magnitude 4.5.

In my personal, Keith Seinfeld metrics, having lived for nine years in California, that qualifies as big enough to feel, and maybe enough to unnerve you.  But, otherwise, pretty minor.  Officially, it’s a “light” but “notable earthquake,” and the biggest we’ve had since a similar one on October 7th, 2006 (which was centered near Buckley, WA).

If you felt it, you can share your report here with the USGS (and see where the shaking was felt most strongly).

Coincidentally, the seismology team at the U.W. reported new details this week on “slow earthquakes” and “deep tremors.”

Seismologist Mario La Rocca and U.W. grad student Wendy McCausland placing a seismometer near Sequim in 2004. (La Rocca is an Italian geologist who works closely with the U.W.)

As I explained in my radio story, these are imperceptible quakes which recur on a fairly predictable cycle — every 15 months.  The next one is due this summer, under the Olympic Peninsula.

The deep tremors and slow quakes are explained in this week’s journal Science.  It appears they’re related to the Juan de Fuca plate subducting under the North American plate.  Each slow quake adds a little more stress and strain to the major fault along the Washington coast.  Every 500 years, roughly, that fault releases in a mega-thrust earthquake.  Ken Creager at the U.W. says it seems possible or even likely that the next mega-quake will happen during one of the slow earthquakes.

Unfortunately, he can only test the theory after the Big One happens.

While I was learning about massive tsunamis this past week, for stories on KPLU and a show called The World, there were some memorable tidbits:

– Waves 90-feet high on the Cascadia Subduction Zone!  Not sure where that is?  It’s basically the Pacific coast from Humboldt, California through Oregon and Washington, to southern British Columbia.  If you’ve been paying attention, you already know it’s not only an earthquake zone, but a major tsunami zone.  The fault is very similar to the one that ruptured near Sumatra on December 26, 2004.  And since then, geologists in the Pacific Northwest are adjusting their hazard maps to allow for the possibility of 60-90 foot waves in some coastal towns.

– When will the next catastrophic wave come?  Ahh, that’s what everyone wants to know.  This week’s news is that it’s been about 600 years between big tsunamis in Sumatra and Thailand.  As Sandy Doughton put it in The Seattle Times, that dates it back to the era of Joan of Arc.  It’s long enough for the rise and fall of a civilization.  You can see the evidence, as it’s beautifully preserved north of Phuket, Thailand.  This photo shows the layers of light colored sand from tsunamis, and dark colored soil that builds up in the centuries in between.  The woman is a Thai scientist, Kruawun Jankaew,  who worked with Brian Atwater of the USGS and University of Washington.

Along the Pacific coast, we also measure in centuries.  The last one hit in January of 1700 (the subject of fantastic sleuthing and science by Atwater and recounted in his book, The Orphan Tsunami of 1700).  Going further back is less precise, and it may be anywhere in the range of 300-1,000 years between big tsunamis.  We could be due now — or it could be beyond our great-great-grandchildren.  The fault-lines don’t follow much of a schedule.

– There was no epicenter in 2004.  The 2004 Sumatran disaster was huge in many ways.  At magnitude 9.2, it’s one of the biggest earthquakes ever recorded.  And the fault rupture was nearly 1,000 miles long (as if a single earthquake stretched from Seattle to San Francisco).  As Atwater put it, we normally use an image of the quake and tsunami that’s like a pebble dropped into a pond, rippling out in circles.  Here’s an example used by the United Nations and the US Agency for International Development

But this is wrong.  It’s more like someone threw a long log into the pond — and the tsunami waves rippled out primarily in two directions.  Instead of a red dot and circles, imagine a long red line, with waves emanating to the left (Sri Lanka) and right (Thailand).   And, if you’re still following this, along Washington and Oregon, we should expect something similar, with a long section of the fault rupturing.