One of the more exciting bio-engineering labs in Seattle has to be U.W.’s Neurobotics Lab.  I got a quick tour from Professor Yoky Matsuoka.  She’s been working on the problem of a prosthetic hand that can perform like a real hand.  In the process, she’s found herself “deconstructing” the human hand.  She discovered, for example, that there’s a functional benefit to the way finger bones are shaped (with knuckles that taper, in a non-symetrical way). She also says having five fingers may not be as crucial as paying attention to the way the fingers bend and flex.

Here’s a photo of her with one of their prototypes.  My interview with Matsuoka that aired on KPLU is here.  An extended version of that interview, with about 3 minutes worth that I had to cut out for broadcast, is at this link.

Digital technology (the savior or nemesis off all types of media) has a new role in movie theaters.  At least that’s the spin I got from the CEO of a small chain, called Galaxy Theatres, based in Sherman Oaks, CA.

Cinemas used to be limited to whatever films they had on-hand during any given week.  By going “digital,” they can play video from many potential sources — anything you can send via the internet or a satellite.  In addition to playing movies, they could show big-screen Monday Night Football in 3-D.  Or, host a giant viewing party for the Presidential Inauguration.  Or, rent the theater out for a myriad of possible personalized showings.

“Take the words ‘Movie Theater’ off the building.  What do you have?” asks Frank Rimkus, CEO of Galaxy.  I didn’t have much of an answer, so (surprise!) he had his own ready.  He calls it a state-of-the-art presentation facility, with a screen that’s two stories tall.  “If you’ve got that kind of building, what else can you do with it? That’s the question.”

In other words, maybe you’re proud of your 48-inch screen and surround sound at home.  But Galaxy boasts a 900-inch screen.  For extroverts: You could watch with 200 of your closest friends. And, as movie theaters experiment with restaurant-style food, you can imagine a near future where “going to the theater” is a little bit like going to a sports pub.  Voila – a new type of “third place” (a term coined by Ray Oldenburg to refer to social gathering spots).

Galaxy is trying to establish itself as a community gathering spot.  Tomorrow (Wednesday, 1/21/09), in Gig Harbor, WA, it’s playing middleman between the public schools and NASA.  A thousand public school students from the Peninsula School District will have a live satellite connection from the theater to the International Space Station.

The live 20-minute Q-and-A with two astronauts couldn’t happen at one of those old movie theaters using film.   (It’s free and open to the public, by the way, with doors opening at 9:30 am.)

So far, Rimkus says only about 10% of America’s cinemas have upgraded to digital projection.  The Cinerama in Seattle was one of the first.   But he predicts a massive changeover in the next five years.  “The industry is basically taking old propeller airplanes and replacing them with jets,” he says.

Hey, maybe Starbucks, promoter of the Third Place concept, could get into this … bring your laptop, have a latte, and watch a giant screen.

Simulation is becoming a trendy buzzword in medicine.  Technology has advanced to the point where a lot of medical procedures can be practiced on high-tech mannequins, or via computer simulations.  A few studies have shown better outcomes for doctors who trained first on simulators, although the evidence is still somewhat preliminary. I have a story airing tomorrow (Thursday) on KPLU about the mannequins.  (Update 1/15 – story now posted here.)

I didn’t have room to mention in the story some of the expansion that’s in the works locally.  The University of Washington’s main simulation center, called ISIS, is not only in new digs at the surgery pavilion.  They’re getting ready to add a much bigger simulation center at Harborview hospital, possibly by the end of 2009, and another one after that at Seattle Children’s Hospital.  Then, there are plans to offer continuing medical education courses using the U.W. simulators.

That should keep the U.W. as one of the national leaders in medical simulation (the top spot is generally considered to be Stanford’s sim center).

The U.W. will be competing locally with Swedish Medical Center, which just opened its own simulation center, and expects to rent it out to train teams from other local hospitals.

The mannequins have come a long way from the old Resusci-Annie, used for CPR training.  They are still clearly dolls, so, as hospitals around the country start buying into simulation, expect to see a lot more innovations.  (Good news for the Norwegian company Laerdal, which invented the Resusci-Annie, and still makes the most popular mannequins.) 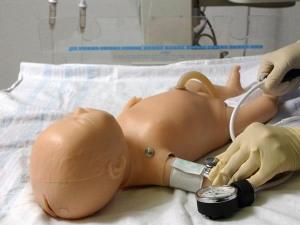 Also, for a nice overview of the use of simulation to make better medical teams, see Tom Paulson’s recent story in the P-I.

If you happen to live in a Presidential battleground state, such as Ohio, Pennsylvania or Florida, you might have heard Sen. McCain talking effusively on the stump about how to revolutionize health-care — using information technology. Sen. Obama has sounded pretty similar.

It’s not an obvious campaign pitch, at least at first. Those of us here in the Pacific Northwest have missed most of this discussion. I got interested when I saw how lucrative it might be.

Electronic health records have been a priority within the health care industry for a while. Getting rid of all those paper files is supposed to lead to fewer medical mistakes and a more efficient system. If you walk into an emergency room (or a clinic you’ve never visited), the doctor or nurse could call-up your medical history, including medications and allergies, and not rely on anyone’s memory.

Reformers who love electronic records envision a day when patients are “empowered” by having access to all their records. Personally, I like the idea of having access to and control of my records. And it definitely sounds more efficient. But once you’ve got a long medical rap sheet, couldn’t it still be too much information for the doctor to scroll through? Especially for your 10-minute appointment?

You can run a full-day seminar on all the lingering privacy issues.

It’s also a big expense on the horizon. I stopped by a conference in Seattle, of health information specialists (a group called AHIMA), and I learned that only about 15-17% of hospitals and medical practices have invested in the computer technology upgrades. Wow – more than 80% still have to buy new computers and servers and a bunch of software, to make the conversion. No wonder software and computer companies are excited. Even Microsoft is getting into the act, with a new division called the Health Services Group.