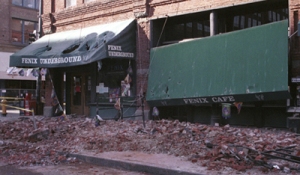 It was bigger in magnitude than the one in New Zealand, but ten times as deep in the ground.

The forces people felt in New Zealand were three to four times as strong as the worst shaking from the Nisqually quake, based on preliminary data, Vidale said via e-mail.

The University of Washington’s Vince Stricherz has written a nice look-back at the Nisqually quake and a few lessons that have been learned since then. For example, we have better maps of which neighborhoods have the highest risks, and more older buildings have been strengthened.

Still, the devastation in a city with modern building codes (as opposed to a city like Port-au-Prince, Haiti) should be sobering in Seattle, Portland, and anywhere in between.

“I think [the damage] would probably be worse here [in the Seattle area] than New Zealand, in that we are much more built up, and we have a lot of old structures built before we knew we have big earthquakes here,” says Vidale.

“It’s worth keeping in mind that New Zealand has some of the most progressive building codes in the world. They are better prepared for an earthquake like this than many U.S. cities would be.”

Disaster planners like to remind us that some simple preparations can help – such as tying down your water heater, reinforcing your chimney, and making sure you have an emergency kit and a plan.